Now before I get started understand I’m willing to receive a lot of hate in order to defend what I’m fond of , respect me for it ! At least I’ll burn with integrity.

Something that truly irritates me is the fact you have to choose self respect verses you’re success these days, you can’t just live your life accordingly without risking your livelihood. We as people have independent morals, beliefs, and senses that we stand by but we must tone it down in order to make sure we don’t ruin ourselves because people don’t know how to allow more than one perception of an individual to flourish.

No, This doesn’t include the derogatory mess some of you refer to as ‘opinions’ regarding race, sexuality, & sexism among other things that don’t even effect you personally but consider to speak out the ass about so, don’t quote me in reference to such confusion considered a ‘moral’, ‘belief’, or ‘sense’.

I’ve always had that “you’re weird.” ‘Problem’ to be frank I still do and it’s so hard to disregard honestly. Only because it’s portrayed that being this extraordinary individual isn’t comforting to others so it isn’t likable since it lacks the norm, From my perspective I don’t get why your incomparable flow couldn’t awaken the minds of others that in fact you can be.. Different!  Just like being told “you’re pretty” or any compliment you hold onto it, the same rules apply to the negativity especially when you’re building yourself up to help you evolve and although being “weird” isn’t something necessarily negative it’s also not something to be fond about. It makes you second guess yourself and it makes you live within a box that doesn’t let satisfy your urge to free yourself.

What I wonder is why people pressure others to continue to not be ‘unhappy’ by not respecting them express themselves while they know how it feels to stay secret.

I don’t think people realize It’s a lack of respect for Originality these days. It’s okay to put out whatever as long as the people like you.  “Be something others can relate to.” As if that’s impossible to do just because something is abnormal a mass amount of people aren’t accepting of what’s ‘irregular’. To me if you, being you is relatable to one let alone a few then it will encourage many to take pride in any and everything regarding them.

Looking back, personally, I’ve sold myself short many times when it comes to self expression for the sake of people to like me. People who didn’t even pay attention to the fact I was like them after I purposely dedicated time to their acceptance.  As a kid, teenager, young creative you are not aware that a person should like you because you are you and not who you should be. That’s as far as it should go though, once we reach a fine moment in adulthood we must start embracing and living for ourselves.

“Confinement“, a word developed from the root word “confine” which is a noun that means “the borders or boundaries of a place, especially regard to their restricting freedom of movement” 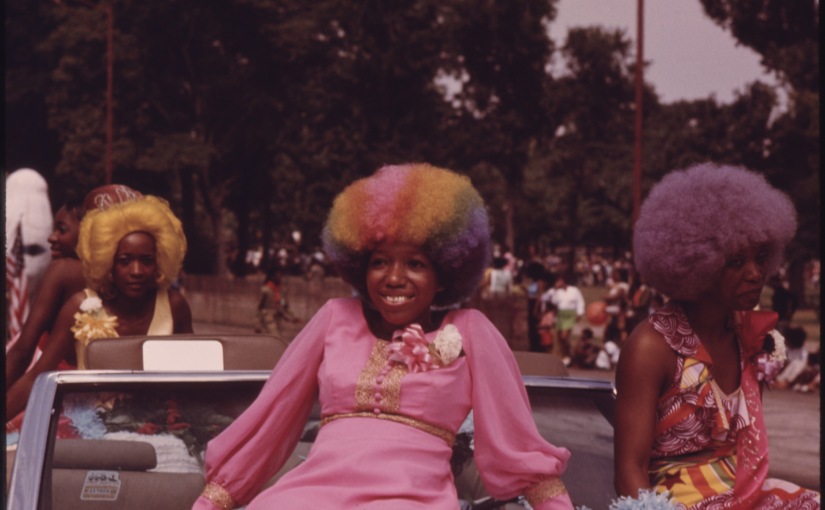 As we prosper we learn to accept the fact that people can & will stress you out while adjusting to the thought that it’s nothing we can do about it. Some people will not see anything wrong with what they do until you choose not to deal with it and even still the problem will be with you and not themselves.

To start accepting the fact that some of the people you absolutely love can be horrendous to your lifestyle can be stressful especially when you have such an over abundance of appreciation for them. Just remember you can’t want to be in someone else’s life more than they want you in theirs themselves.

Acceptance is the finale when it comes to easy living. It’s a thing called good stress & bad stress! Bad stress is stress that doesn’t teach you a lesson to contribute to you not stressing again, while good stress helps you evolve correctly making you stronger in the process.

The cover is a photograph captured by John H. White in 1973 during the Bud Billiken Parade, Chicago.

As years progress You can tell which friendships grow on you in positive and negative aspects.

When I say friendly rejection I’m not talking about being “Friend Zoned”. I’m referring to the attempts of building bonds with people and you guys just don’t relate or they might not see the coolness you see in yourself.

1. Weird – Suggesting something is supernatural; Uncanny.

3. Independent – Free from outside control; not depending on another’s authority.

It took me a while to pay attention to this type of stuff because I had no choice but to enjoy the company of myself on many occasions, and with doing that it gives you time to simply self reflect and learn yourself. I appreciate the people who never cared to be my friend after a long struggle of me trying because it showed me to give everyone a chance UNLESS something that crosses the line happens then I can’t associate with you anymore, but that’s a given. It’s no telling how much someone wants you in their life and just because you don’t have too much in common I don’t think you should necessarily ignore them, hear them out have simple conversations… adapt a new way of thinking it’ll open your mind in a very positive way.